Introduce ID cards to control immigration instead of leaving the EU 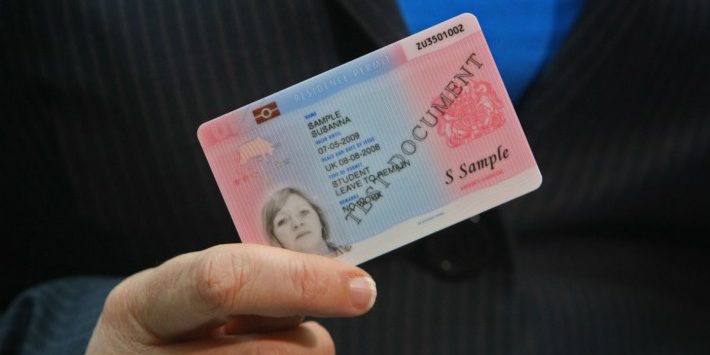 ID cards should be introduced in the UK as part of a new effort to control immigration without the need for Brexit, a new report has said.

Tightening current rules and forcing everyone living in the UK to have an electronic identity card would address many voters’ concerns about immigration without the need for Brexit, the Global Future think tank said.

The report was backed by Labour peer and former cabinet minister Andrew Adonis, who said Remain supporters needed to show they were responding to the issues that led people to vote for Brexit.

It suggested the UK should do more within existing EU rules to tighten controls on immigration, pointing out that Britain is the only country in the bloc not to have a national ID system.

Britain could stay tied to EU rules until after next general election
A system of electronic ID cards that controlled people’s right to live, work, claim benefits and use public services should be coupled with a tougher approach to integration that would force immigrants to learn English, the report said.

At the same time, it said, the government should plough money into strengthening communities and enforcing workers’ rights.

Global Future said interviews with European politicians revealed widespread surprise that the UK had not made use of its current powers to manage free movement, as other EU countries have done.

The report accused Theresa May of interpreting the Brexit vote to mean freedom of movement must end “whatever the cost” – a move it called “a mistake”.

It suggested that British voters are not opposed to immigration in principle but want tougher action against criminals and those seen to be taking advantage of the rules. Concerns centre on four areas, the authors said: ensuring criminals are kept out, relieving pressure on public services, ensuring access to good jobs, and promoting integration.

Lord Adonis said: “The choice between EU membership and controlling migration is a false one. Electronic ID cards would mean we know exactly who is here and give us real control over access to out public services and entitlements.

“A new Strengthening Communities Fund could pump £2bn a year into the public services and infrastructure facing new demand, and we could have tougher minimum wage enforcement and new rules to ensure British workers have the first chance to apply for new jobs when they need it.

“These policies are practical, actionable solutions to immigration that are already being deployed across Europe. I believe strongly that they will help to persuade voters that the best way to take back control is to stay in the EU and get serious about immigration and welfare enforcement – so let’s do that instead of trashing our economy on the basis of a false choice.”

Calls to resurrect proposals for introducing ID cards in the UK are likely to be condemned by civil rights campaigners. The Blair government put forward plans for a similar system but they were dropped by the Coalition following heavy opposition.

Global Future said anyone planning to stay in the UK for more than 90 days should be required to have an electronic ID card that would be needed to access employment, public services, benefits and housing.

Cards should be free and would cut bureaucracy by ending the need for people to have numerous official documents, such as driving licenses and national insurance cards, the authors said.

The report said the system would also allow the government to keep track of where immigrants were living and working. This data could be used to inject fresh funding into public services in areas where immigration has surged.

At the same time, Global Future said, the government should strengthen workers’ rights and set up “enforcement squads” to crack down on unscrupulous employers, including those that do not pay the minimum wage.

And a new multi-billion pound “Strengthening Communities Fund” should be set up to help teach migrants English and encourage them to integrate within their communities, the think thank said. This would replace the existing Controlling Migration Fund.

Id Card Printers Market Is Expected To Have the Highest Growth Rate During The Forecast Period
February 27, 2019

A guide to proximity cards for physical access
April 3, 2017
Go to Top